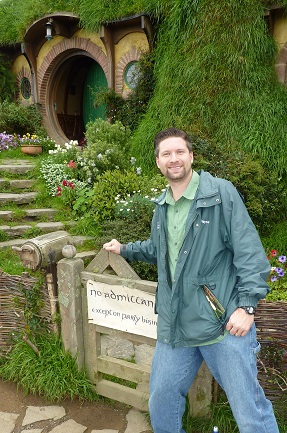 My name is Wayne Kramer, and I have a confession.

I like to write.  In fact it's quite my intention to do a lot of writing...as in, professionally.

I'm a relatively simple family man.  I live in the Indiana countryside with four daughters that light up my life and a wife who's also my best friend.  We are surrounded by family and friends and an awesome church community.  I love to travel and have been to nearly 40 countries and 25 states in the USA.  I especially loved visiting Hobbiton in New Zealand.

As for writing, I suppose one could trace this wild hair back to my elementary school days, when I first started writing "Haunted House" stories (starring Dr. Pig and Detective Penguin) for class assignments.  English was always one of my strongest subjects, in which I did particularly well naturally.  I would later write stories such as "Red Planet Rescue" and "Colonization: The Venus Project" for Young Authors contests and high-school projects.  "Red Planet Rescue" was chosen by our group to be made into a "movie;" that is, a high-school late 1990s-era VHS no-budget movie.

What really developed my writing chops over the years was the Chrono Trigger Novel Project, an effort I still preside over to this day.  This video game novelization challenged me over and over as a writer, with constant revision after revision, rewrite after rewrite.  One might call this fan-fiction, but I have always considered it an entrepreneurial endeavor.  The whole idea is to take the story from one of the most beloved RPGs (role-playing game) of all time and novelize it.  By novelize it, I don't mean just rehash the story in words.  This is a reimaging for what would be a burgeoning novel series, taking the potential of the original story and expanding it into a full epic-fantasy setting.  I have always hoped to negotiate rights to make this happen commercially.  This project can be followed in more detail at www.chronotrigger.com.

"Heroes of Time" came about because it was finally time for me to move beyond video game novelization and to my own world, where there were no boundaries and I could put the fullness of my writing experiences and instincts into practice.  The HoT series is being developed as a very character-driven adventure saga, with a cast of characters that feel real and relatable, with legitimate emotions, backgrounds, desires, and motivations.

My professional background has been in the world of business, especially within the world of medical equipment.  My current "breadwinner" business is W7 Global.  From 1998 through 2013 I was deeply involved in our family business, which was ultimately sold.  During those years I went from sweeping the floors and scraping contrast media off of old CT scanner machines to managing inventory to developing the company database system to ultimately managing global business growth and key areas of the company's operations.

In the period of 2010 through 2013 my career took a tangential path into the field of licensed products.  We worked with private membership clubs and famous brands such as Garfield, Felix the Cat, and Legends of Oz.  For these brands we worked on the design, creation, and sales of licensed retail products from playing cards to toys to collectible statues to jewelry both costume and fine.  I had a lot of fun in this business.  It didn't work out when the brands we'd put the most into ultimately failed, but I learned a lot, and it gave me some of the confidence I needed to set my future sights into the world of media and entertainment.

That plays into the vision of Heroes of Time Productions.  At its core it all centers around the novel series.  At its height I envision a thriving entertainment brand with movies and products and active fan communities.  It's my passion to create something people can love and enjoy, and I am both honored and humbled to have that opportunity.