In Chrono Trigger, the game presents Truce as the thriving central settlement of Guardia Kingdom, which itself is the predominant (in other words, only) world power...and yet it still calls Truce a "village." The game has only seven buildings in Truce that can be entered, with a small handful of others shown on the world map. In reality, a village this size would hardly even qualify as a village, let alone one capable of hosting the Millennial Fair, which we are told people are visiting from all over the world. 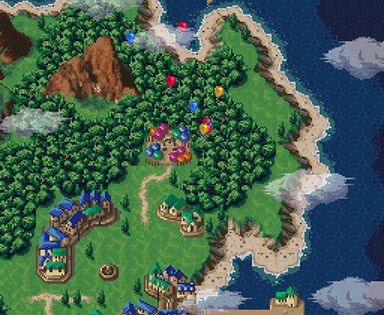 How, then, to novelize this in a realistic and believable way? This was always the question in dealing with Chrono Trigger's content. While I've endeavored to remain faithful to the game as much as possible, a decision was made that the true priority should be that the world should feel real, believable, living and breathing, and capable of being changed.

In the first book of the novelization, Chrono Trigger: The Hero Rising, Truce is represented as a far larger town, scaled up as the world itself is scaled up. I believe this representation of Truce, and the Millennial Fair, represents what they would look like in-game if Chrono Trigger was being made for the first time today, without the hardware limitations that games faced in the 90s. Each building visible on the world map could be considered an entire subdivision of residences and commercial buildings. Lucca's secluded home on an island to the south is now an entire community of houses, Lucca's being among them. The scale-up is not unlike the increased scale of the city of Midgar in Final Fantasy VII Remake.

This globally increased scale is also reflected in the Millennial Fair itself, both in terms of crowds and activities the visitors take part in. But to find out how it all plays out for yourself, you'll have to become a beta reader. Join the team today!